skip to main | skip to sidebar

The Museum in English

Welcome to our English-speaking visitors !

New : enjoy visiting the museum with free audio guides  ! On loan with your entrance fee (no extra charge) and also available here : download the English version.

History
The museum was created at the beginning of the 20th century by two natives of the region : a painter and a poet. José Belon, the painter, asked his friends artists to donate artworks in order to create a fine arts gallery. Albert Roux, the poet, wrote in Provençal dialect and wanted to create a « Museon Uzétien », a folklore museum like the « Museon Arlaten » created by the famous Provençal poet Frédéric Mistral in Arles.
Both museums were gathered and settled in the Town Hall in 1910. Later they were completed with a collection donated by a local archeologist (items discovered in archaeological sites of the area).
After World War II, the museum had fallen into oblivion. Georges Borias, an art teacher at the local highschool, saved it by reorganizing it. During more than forty years he directed this museum as a voluntary worker, helping to make it grow and improve. The museum now bears his name and was labelled by the French Ministery of Culture as a « Musée de France ». 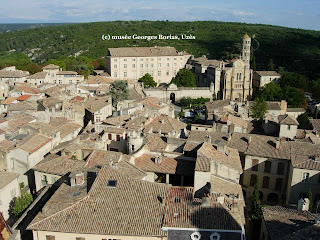 Since 1978, the museum is settled in the former bishops’ palace (17th century), a beautiful heritage building located between the old city and the valley of the Eure spring.

All archaelogical collections come from Uzès and its area, dating from Prehistory to the Gallo-Roman period. Some of them were collected by Eugène Delorme and donated in 1913. Others were donated by a local archaeologist, Achille Trouchaud, in the 1950s.

The past of the city is evoked through old maps, portraits of famous people born in Uzès (Moÿse Charas, the King’s apothecary ; admiral De Brueys, killed in Aboukir Bay battle), the bishops and the duchess of Uzès…
There are also everyday items linked to local traditions : work (silk stockings manufacture) and leisure (see a spectacular picture by José Belon, showing a fight competition during a local celebration).

One room is dedicated to local pottery from Saint-Quentin, Serviers and Uzès. Some date back to the 17th century, most were made during the 19th century.
This is one of the finest ceramic collections of the region, with lovely everyday pottery, simple but gracious. There are also tools : a potter’s wheel, plaster moulds, tools used for making clay pipes (Job Clerc pipe manufacture in Saint-Quentin).
Another room is dedicated to the production of the Pichon manufacture (Jean-Paul Pichon’s private collection). This manufacture was created in Uzès two centuries ago and still exists. Pichon is famous for using the « marble earth » technique : a mixture of clays with different colours, looking like coloured veins in marble.

Uzès was a birthplace for important painters. The museum only owns one print by Pierre Subleyras (1699-1749) but shows several paintings and drawings by Xavier Sigalon (1787-1837) and Ferdinand Roybet (1840-1920).
The pictures gathered by José Belon for the foundation of the museum in 1910 are typical of the « Belle Epoque » period’s taste : women with children, flowers, peaceful landscapes…
More recent pictures complete this collection, by artists with close links to the South of France : Chabaud, Seyssaud, Albert André...

As a child, the famous writer André Gide (Nobel Prize of literature) spent his holidays in Uzès, by his grandmother. He wrote wonderful pages about his ancestors’ city in his autobiographical novel “But If It Die”.
A room is dedicated to Gide : a unique collection of portraits, personal belongings, manuscripts, books… gathered thanks to the support of his daughter Mrs Catherine Gide.
Temporary exhibitions about Gide are regularly held by the museum : in 1993, « Gide and his painters », in 2001 « André Gide, a free man », in 2004 « Gide and Northern Africa », in 2011 "André Gide's Family Pictures Album" (in collaboration with the Catherine Gide Foundation).

The museum also evokes another great writer in Uzès, two centuries before Gide. Jean Racine had not yet become a playwright, he was only a young orphan in need of a situation. He came in Uzès in 1661, in the hope his uncle (a canon at the Uzès cathedral) could get him a job. At first he was seduced by this charming city with nights « lovelier than your days » - but after a few months he had to admit there was no job for him and to leave : he was more successful with theatre in Paris than with religion in Uzès !

Closed in January, on November 1st and December 25th .